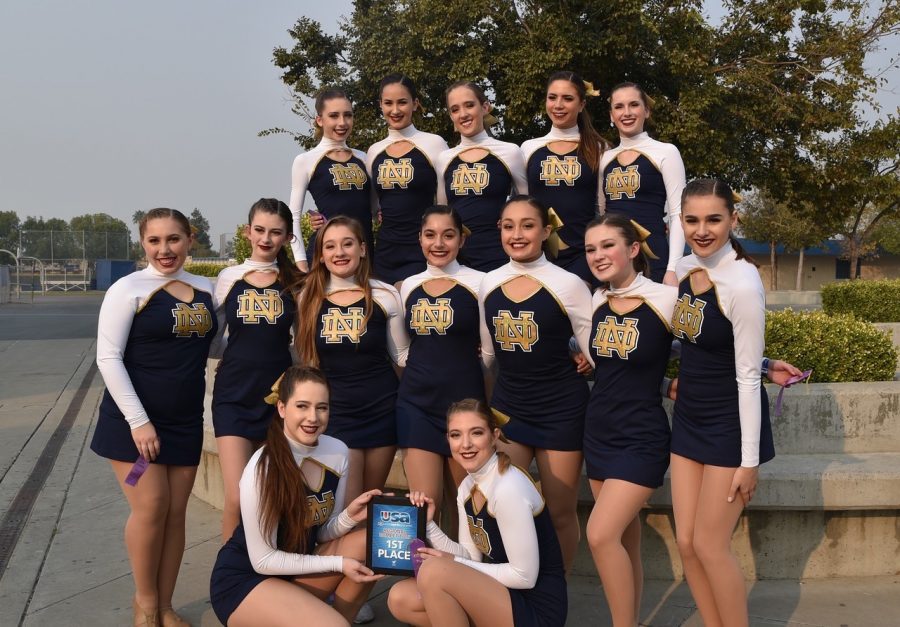 The pom team poses with their award.

In early November, the cheer and pom teams both took first place at their first competition of the season in Tracy, California. Their wins at the United Spirit Association (USA) regional competition really showed that the spirit squad is here to win, and pom is especially excited to maintain their national champion title.

Senior Abigail Rossi is the co-captain of the pom team. She has been a member of the team for all four years of high school, so she was especially ecstatic to see just how far this team has come since starting with them in 2015. She sat down with the Catalyst to explain how the scoring process works, and why she, along with co-captain, Senior Kerrianne Hines, are so proud of their team.

Rossi says, “This is a special team, and we can see that already after this first competition. At the awards ceremony portion of the competition, our team got first with a score of 84 out of 100. This was outstanding considering it was only a point off of our national score, which shows us that we are in a great place.”

Senior Emma Sponsler, along with seniors Celeste Crews and Abigail Silk, captain the cheer team and lead them in practices in order to ensure that the girls are always competition ready.  Like Rossi, Sponsler has been a member of the team for all four years of high school.

Sponsler spoke to the Catalyst about the pride she has for her team.  She says, “I’m so proud of my team! We have been working so hard at our practices every week and trying to improve our routine everytime we all get together to practice. This win made me confident that we are going to have an amazing season!”

Both the cheer and pom teams practice separately twice a week. Cheer practices every Monday and Wednesday, while Pom practices every Friday and Sunday. Pom is so dedicated that their Friday practice is on-campus from 6:15am – 8:00am. They also collaborate on Thursdays from 3:30-4:15pm to go over “Game Day” cheers since they cheer for both NDB and Serra HS’s athletic teams.

Having wins for the first competition of the season bodes well for both teams as it shows that all the work they have been putting in is paying off. As both seasons go on, they will continue to compete in hopes of earning a place at nationals, a competition in Anaheim, California. Here, pom will compete to maintain their national champion spot, while cheer fights to bring home another banner for the Tigers.